Frank has been an exhibiting member of Piedmont Crafts in woodcrafts since 1967 and is a Life Member of the guild. He exhibited at Piedmont Craftsmen's  Fairs in Winston-Salem, NC through the mid-seventies. He studied pottery and wood three summers at Penland School of Crafts. He is a retired technical education administrator at the West Virginia University Institute of Technology. He completed construction of an art studio/woodshop in 2007, and has become active again in producing his own work.  He has had work in several juried and invitational exhibits, including Piedmont Craftsmen's 45th Anniversary Show, and their Exhibit at the Tea cup Museum in Sparta NC, as well as the 35th Art at the Mill show at the Burwell-Morgan Mill at Millwood, VA. His current focus is on making live-edge furniture and furnishings as well as his signature slatted vases using walnut and cherry wood. 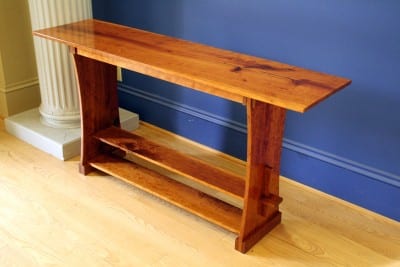